Six years after her husband was grievously assaulted and left severely disabled as a consequence, Dawn took part in Restorative Justice Conference which helped her to make sense of what happened on that day. The process started with a call from our Restorative Justice practitioner Peter, who guided Dawn throughout and ensured that her voice was heard. She was especially interested in the process as she found out that the process can lead to a 14 – 18% decrease in reoffending rates. Dawn was adamant that she did not want anyone else to go through what she had experienced.

Dawn was away from home for the weekend and she and her husband texted throughout the day. She became worried when he didn’t answer her calls later on the in the evening as it was uncharacteristic of him. She drove back to Nottingham that night and all the way she worried about what she might find. As there was no sign of her husband at home she started to call around hospitals but as it was a bank holiday weekend, she could not get to talk to the right people. She even contacted the local police station but they did not have information about him at the time. So Dawn could only sit and wait, scared of the knock on the door and knowing that it would come.

The police came in the afternoon, and only then did Dawn find out that her husband had been assaulted on his way home by two strangers and that it was a touch and go if he was going to live. He woke up from the coma five weeks after the incident and their lives have been changed for ever.

For Dawn, the journey from the incident to Restorative Justice Conference took a long time but she felt that she needed to make sense of what had happened. She had a lot of questions that were not answered during the initial court process and subsequent parole hearings. As the Restorative Justice Process was run with her needs in mind and she felt reassured that her views and feelings would not be minimised by the offender.

During the face to face Restorative Conference with the offender, Dawn felt empowered and was able to explain how the incident impacted on their lives; not just the past and present but the future as well. She also felt that the offender showed true remorse and she could see that the meeting had an impact on him. Dawn felt reassured that he changed his attitude in prison as well as genuinely thought about what she had to say. Dawn thanked the offender at the end of the Restorative Justice Conference for being honest with her and sharing his feelings.

Dawn also shared her story to Restorative Justice Council – you can read the full interview in their publication: Resolution, Issue 62: Spring 2018 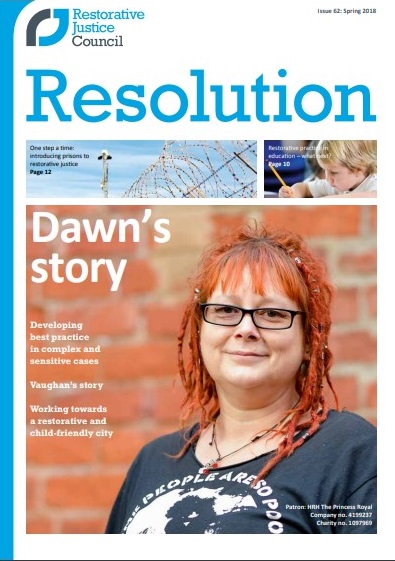